Nesting: is a blog about the objects and experiences that create a sense of home. Without home, it is difficult to maintain health, find joy, or to be productive during our workdays. I hope you enjoy the Nesting series of blogs as much as I enjoy writing them. –Jana

Our homes are our safe places – hopefully. Sometimes we want and need to shut-out the rest of the world. Shutting out the negative messages, the stories of world events that we can do nothing about, and the advertisements that tell us how sick we are or how much we are failing is imperative to our health and well-being. There are a variety of things we can do to shut-out unhealthiness and welcome well-being.

Shut-out: Shutting out what overwhelms us in the world gives us time to regroup and to rebuild our energies. A book club friend stopped her newspaper subscription many years ago, unsubscribing for over a year. In spring 2018, I too decided to stop the daily onslaught of negative stories about which no action I could take would change the outcomes. After four months, I felt ready to subscribe again.

Another shut-out for the protection of your thought and well-being is to turn off audio and video media inputs: on your phone, on your monitor, on your television screen, and on your commute-time media too. For over two decades, I have wondered how much healthier we would be as a nation if pharmaceutical companies were not allowed to advertise in video media. Cigarette and alcohol companies are not allowed to advertise on television any more and yet they are not the only potentially health-threatening companies actively selling us products. 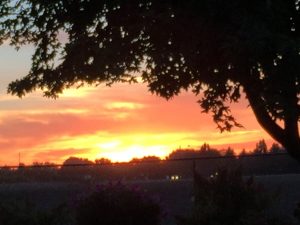 Sunset at a friend’s home provided moments of wonder – the rest of the world ceased to exist.

Shut-out people. I know, I know. It sounds cold. However, how many times have you realized that a friend was actually bringing you down? Or that a family member was actually toxic to your health and well-being? A student I know chose to end a friendship because she felt that carrying the weight of a suicidal friend (for whom medical help had been gotten and received) was too much for her as a teen to carry. Adult friends have shared that they have ended relationships with an alcoholic parent in order to protect their current lives and family members. Yes, these are difficult shut-out decisions.

Yet, at a certain point, when we are not taking care of ourselves, we are unable to take care of others. Sometimes, the shut-out of toxic messages and people is the best way to protect ourselves. What are you doing to protect your well-being each day? What and whom do you want to shut-out for a while, or even permanently, to better care for yourself?